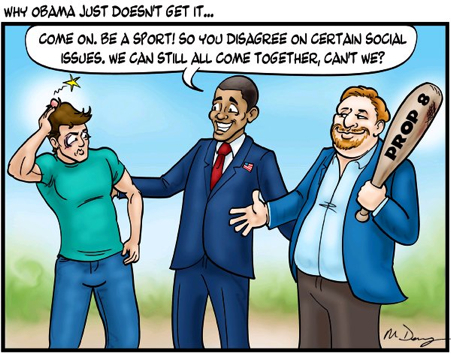 I am terribly disappointed in the choice of Rick Warren to say the invocation or the magic words at Obama’s inauguration. I too supported Obama, donated my time volunteering and donated money that I could have used for myself and my partner of 8 years.

I have stopped being a member of Obama Pride when it seems too hypocritical for gay people to continue in that Facebook group.

To have my relationship as well as millions of others relationships compared to incest, bestiality and pedophilia and then have the person as an honored member at your inauguration is really too much of a slap in the face to those of us in same sex relationships.

Obama claims we can disagree without being disagreeable, and by saying that it seems to me that the incest, bestiality and pedophilia comments are not disagreeable to him.

After years of being told by Warren and his ilk, that we are sinful in our love, not to mention his positions on a woman’s right to choose, and stem cell research as well as his attacks on atheists, to see Barack Obama embrace such a person really hurts and looks like an endorsement. It really is terrible and it hurts.

Does his team really think that an LGBT marching band will heal this open wound? Wouldn’t Rev. Peter Gomes, Harvard theologian and chaplain who did the invocation for Reagan and Bush I have been a better choice? I cannot understand how a person can unite by embracing a ‘person’ such as Rick Warren who spews nothing but hateful words about a large group of Obama supporters.

No. After donating my time and money to the Obama campaign, for him to turn around and embrace someone who considers same sex relationships to be evil sinful and akin to bestiality, incest and child rape, to invite him to say some magic words at his inauguration is just wrong and I withdraw any further support.
Let his new friends at Saddleback Church pick up the slack.
Posted at http://www.365gay.com/news/calif-gay-rights-leader-rejects-inauguration-invite/#

I helped build the most powerful and effective grassroots movement in America. You picked someone who considers my relationship as well as millions of others to be tantamount to incest, bestiality and child molestation to perform the invocation.

I suggest you ask the parishioners of the Saddleback Church for any more money, for you will not be getting any funds from this disillusioned supporter.

Kindly refrain from sending me any more emails regarding Barack Obama. I have donated my time and my money for his election, but I will not sacrifice the pride I have in my same sex relationship.
Good-bye.
In response to:
John —
You helped build the most powerful and effective grassroots movement in America.
Now, you’re helping to define how this movement will support President-elect Obama’s agenda and continue to bring the change we need.
BREAK
Between now and Barack’s inauguration, we’ll continue to collect your ideas and feedback.
After the inauguration, we should be able to announce a clear plan for the future of this movement — a plan determined by you.
Thanks for being a part of this journey to bring about change in the years to come,
David Plouffe
Campaign Manager
Obama for America

Other than that, Mrs. Lincoln, How was the play?
It’s been a pretty good day. Feeling more in the holiday spirit than I’ve been lately.

Bill came home last night, if only for an hour or so. It was just really great to have him here. I missed him, missed being able to hug and kiss him without care. He tried to set up my computer with the wireless but he couldn’t do it either.

I didn’t mind, I wasn’t upset. I have been using his Mac for so long now, a couple of weeks already that going back to the small screen almost feels like a step backward. But it’s not my computer, it is Bill’s and though he doesn’t mind, I should get back to it.

Got the presents en route to California. One gift inside was purchased before my sister Annemarie issued her edict on no presents this year. By writing this I expect to head her off at the pass so I won’t hear ‘Oh You shouldn’t have. Really…’ in her sweet dulcet tones.

No hanging with Pedro last night, no heading out to see Ann Boyles at Meghan and Jim Mastro’s house tonight. Meghan is a bit ill and it’s really ugly outside.

Rain, sleet and snow and I almost broke my neck outside walking down the street so I’m staying home. Oh well.