Well this has been quite a crap filled day. Last night wasn’t so bad but when I went to bed it was awfully cold, causing me to shiver and shake with chattering teeth. Nothing I could do could warm me up until I put on a wool hat and finally got something like sleep. And it wasn’t a restful sleep since I woke up just as tired as I was when I went to sleep.

Still I got it together and got dressed for work. 44 degrees outside yet I was sweating. Definitely not running at full strength so I took my time. By the time I was walking through Bryant Park I realized that I probably should have stayed home. It’s this damned bug. Came to the office a little past 8:00 where I was surprised to see Tom Chin in before me.

He mentioned that I wasn’t looking too good and questioned why I had come in. Also mentioned the fact that I am more than likely getting other people sick. I had no response to that except to say that I had things to do. And do those things I did. A hour later I was spent.

A few people mentioned how pale I looked so a little before 11:00 I was on the street walking across town. I dreaded waiting at the bus terminal and sure enough I got there at 11:42. The previous bus just left at 11:40 and the next bus was at 12:00. I couldn’t do much of anything but wait so that’s where I was with a line of people forming behind me.

A older geezer just walked past the entire line and stood just outside the door so he would be the first one on the bus. Oh I had such dislike for that geezer. Idiotic bus driver too, dropping people off wherever she felt like it, but making me wait for the light to change before she would let me off the bus.

I walked down 6th Street in Hoboken towards my house. Most everyone working or in school. Turning onto Park Avenue I see a dump truck in front and the sound of jack hammers. Three hours previous I was walking on this sidewalk, didn’t notice anything wrong with the sidewalk but apparently something had to be done without my knowledge.

Still don’t have a working buzzer, and now we’re without a sidewalk. And of course since all I wanted to do was sleep I had to put up with the sound of a jack hammer tearing up concrete then loaded into the dump truck.

Some how I was able to sleep through most of it, with me finally getting some sleep as the laborers had their lunch. An hour later the noise started, still irritating and loud but still I slept. It seemed like every move I made was the wrong move.

Now I am awake obviously, temperature is 99.1 as opposed to yesterday’s 97.7. And of course now that I’m awake, they are done jack hammering outside.

I just got back from the store, apparently there was leaking water so that is why they needed to chop everything up. At least that’s what they told me. 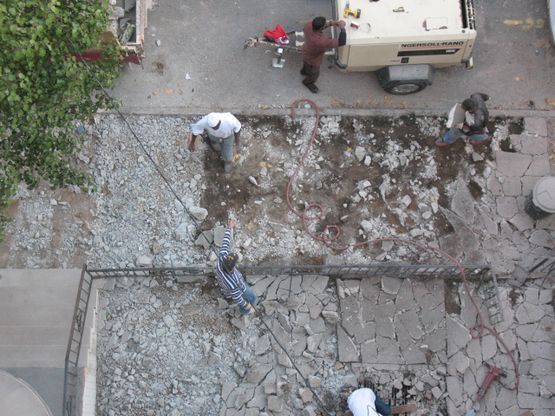