Well I am looking forward to work tomorrow, it will be something to do. Though I will be dreading and perhaps lying when asked how my birthday weekend was. The past two days have been quite dull and the highpoint of the day so far has been a walk to the Hoboken post office.

Yeah it’s been a rather pathetic weekend. It’s close to 90 degrees out right now and it’s muggy as all hell. I had had enough of being cooped up inside today and decided to head into the city. The sun was beaming on the side of the street where the buses into the city ride so I was opposite, walking down in the shade, keeping an eye out for the buses.

The bus showed up when I was between stops and the bus drivers do not pick up people that are not at the bus stop so I was screwed. I found myself walking around Hoboken carrying three pounds of coffee and whining to my sister on the phone about what a pathetic weekend this has turned out to be.

I’m just so annoyed at myself that I postponed drinks with Rand and Lisa. They didn’t give me a set time and even though I have nothing but time on my hands my mood had turned considerably rotten and anti-social.

I thought it would be better if I just went back to my messy apartment and sat in front of the computer since my life wasn’t pathetic enough. Bill was upstate yesterday then at his mother’s last night. Juan said he was going to stop by after seeing his family but he didn’t. I’m just a lonely guy it seems.

Once again I find myself depending on others to get me through, to show me a good time. And then when there is an offer I bail. Now I’m hungry and cranky. I bought a half pint of heavy cream and I will more than likely make some more sub-par pesto with pasta and chicken. This time ignoring Annemarie and Harpy’s advice since heeding their advice yesterday left me wholly dissatisfied.

Annemarie had the right idea on her birthday weekend. She went away on a yoga retreat. My problem is, I don’t do yoga. She suggested following one of my interests, but what are my interests? When pressed for an answer I come up blank.

Music? That’s about my main interest, but how could I pursue that? I have a ticket for My Bloody Valentine on September 22, but right now I’m thinking about selling it. I don’t want to go by myself and I could use the money and I did see them back in 1991 at Studio 54. I think those are three pretty good reasons not to go.

Another interest of mine would be the movies. But I don’t like going to the movies alone. There are plenty of movies that I want to see too. Yeah I’m in a situation of my own doing. I could call people up but when I do they have other plans or simply can’t make it so I end up not even asking and sitting at home feeling sorry for myself.

I’m annoyed with myself, with my computer, with just about everything that crosses my path. It’s just as well that I sit here next to the open window sweating in a warm breeze.

Oh right, I have a dental appointment tomorrow. That’s something to look forward to. Nothing major, just some x-rays and periodontal charts that need to be done again and then sent back to the insurance company so they could deny my benefits for the third time.

Last night I watched The Brave One starring Jodie Foster and Terrance Howard. Oh it sucked. Easily forgettable. Another DVD rental that when it ended I couldn’t help but yell BOO. Bill is in it for about 2 seconds, in the building that I worked in when I worked for Golden Staffing on 44th street.

You have to slow down the DVD considerably and zoom in order to catch Bill getting into an elevator.
All in all a crap movie.

Also caught SNL last night which was funny. Tina Fey ‘surprise guest’ as Sarah Pallid. She had the whole accent down perfectly, the long flat tones as she speaks. Lil Wayne wasn’t all that. Easily ignored.

A little while later.

I’ve eaten. Used olive oil, a dash of heavy cream, a lick of butter and two and a half tablespoons of pesto sauce, maybe three tablespoons. A definite improvement over last night and a definite positive effect on my mood. When I don’t eat I tend to turn into Joan Collins. Or my father. Or Joan Collins father.

The pasta was good, the sauce a wee bit creamy but not creamy like I would get on 57th street for lunch. A happy medium it is. Not feeling so sorry for myself. I don’t have it so bad, as bhikkhu states in the comments below. 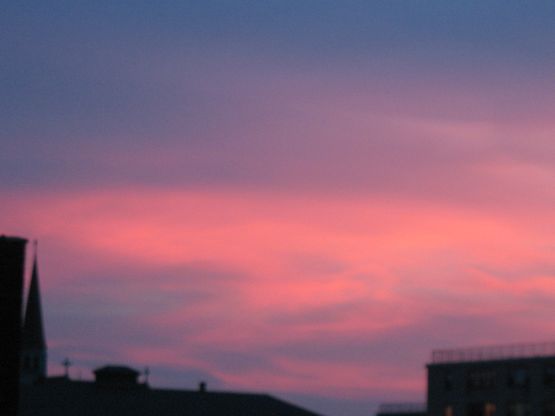