Last night mellow. My evening routine was askew since I wrote before I came home. Nothing to worry about. I was home by 8:00, Bill was watching the convention on MSNBC. I planned on watching Weeds at 10:00 but neither of us wanted to miss Michelle Obama’s speech.

Ted Kennedy was pretty good, with his swan song. The fat lady off stage, waiting to sing for Ted’s political career. I mentioned to Bill that as Ted had gotten older, he became a great statesman. Though the grumbling about windmill generators off Hyannis Port was a bit troubling.

I told Bill that Caroline will probably become the head of the Kennedy family once Ted moves on. Bill went to bed soon after Michelle Obama and I watched the news, eventually going to bed around 11:45, which is a bit late for my ass.

Slept like a rock or so I thought. I woke up tired and slept a little later than usual. I saw Casey on the bus yesterday but since I was late, no Casey today. Walked across town, still a bit groggy, figured once I had a few cups of coffee I would be alright. Well it didn’t turn out alright as I kept getting more tired as the hours crawled by.

Bill was feeling quite the same way. Today I left work early. Yesterday the other two left early, but today was my day. And I’m still taking off Thursday and Friday. Juan’s in town today but since Bill and I are fatigued for no reason at all, it’s probably best that he stays away. Plus it promises to be an early night for the both of us.

I’m still pretty much out of it even though I came home and napped for two hours. I did finally get my hair cut from Tony at Mr. L’s down the street. I walked by and he was free so I popped in for a quickie. My hair grows thick and at a certain point it can be too much.

So a trim was in order. Tony always does a good job and mentions most times that a lot of guys would love to have my hair. He’s a 60-70 something Italian immigrant who lives with his wife in South Hackensack by Lodi, not the South Hackensack by Teterboro.

Uses a color rinse on his hair every month and a half and cuts hair next to his 50 something son. He goes the extra mile, trimming nose hair, ear hair and selectively removing gray hairs from my goatee earning a decent tip. So now I feel a lot cooler physically and mentally but still pretty much tired.

I’m sure a good nights sleep would do me good as well as doing Bill good. I got an email from Pedro with a pic of 30 fellow CO’s tailgating in the parking lot at Shea. He was there, I was wrong. We cleared it all up on Sunday on the phone so that’s good. 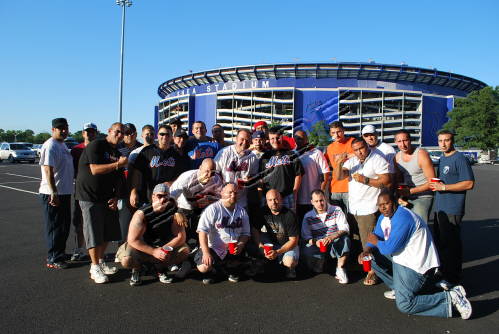 Still reading Alan Bennett which is slow going. Right now he’s talking about his Aunties. All well and good but for me it’s been dragging. Maybe it’s my fatigue. It just reminds me of the boring visits to my Aunt Diddy in Flushing.

She was my father’s sister and her house was not child friendly. There was nothing to entertain a 10 year old boy and I could only get some money from my mother so often to go get comic books a few blocks away. But obviously I’m veering into Alan Bennett’s style and I’m very tired.

I’m surprised I got this far tonight.