Just got home about an hour ago. Made a pound of pasta yesterday and I still have enough left over for tomorrow. It’s not bad. It’s the usual weekend fare, pasta, chicken with sauce. No pesto, that’s the Thursday thang.

Last night didn’t do much of anything. Wrote the blog, edited some pictures. The Olympics were on but without Bill’s enthusiasm it didn’t hold much interest for me. Today was going to be different. I was heading into the city to go to Summerstage and check out Sharon Jones and The Dap Kings.

Not a motorhead, but I thought this was worth looking at 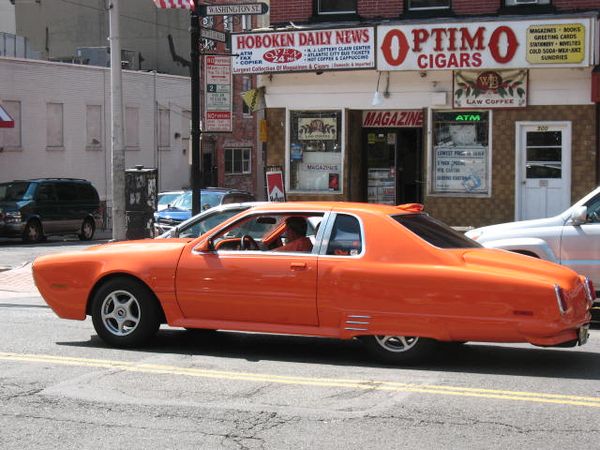 I hopped on the bus and once in the city I decided to walk around, up to the park. I planned on walking up Park Avenue, a little out of the way because they had closed the street to traffic, leaving the streets to pedestrians and bicycles and kittens! Where they got the kittens from, I don’t know. But the last day for the street being closed was yesterday so no kittens today. 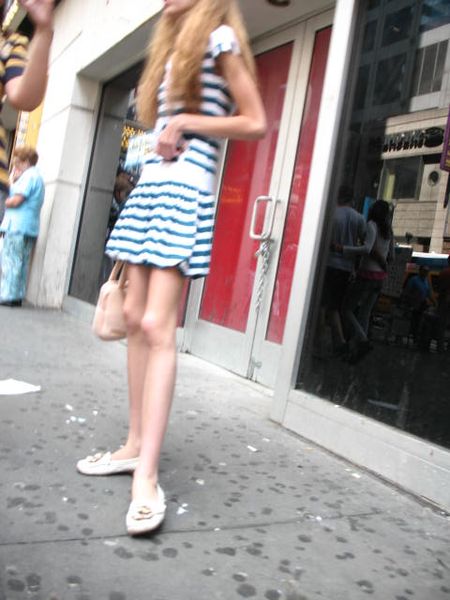 I bought a different cigar, a La Flor Dominicana Double Legero. All I know is that it was Dominican. I got a good deal on it and strolled up Fifth Avenue puffing away and look at all the other pedestrians and tourists roaming around in the shady side of the avenue. It wasn’t as crowded as it was yesterday. A lot less people, but still plenty of toddlers.

My cigar and a dandy… 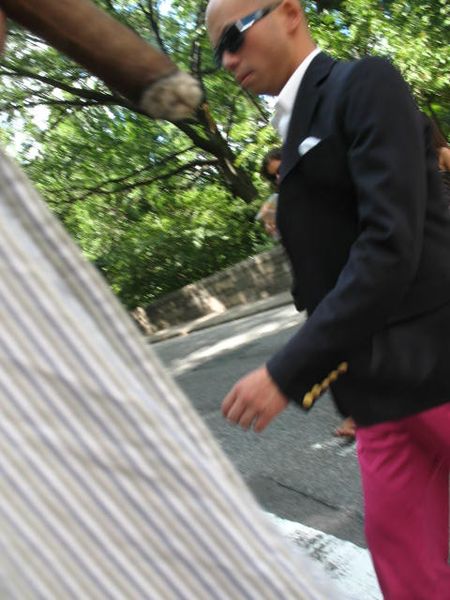 Yesterday in an odd moment I was talking to Annemarie on the phone while in the park and I mentioned that there were so many babies, that I wondered if it was because of the blackout that I wrote about on Friday. Annemarie brought me down to earth and punctured my omnipotence. She’s good like that. Reminded me that the blackout was five years ago, not last year. 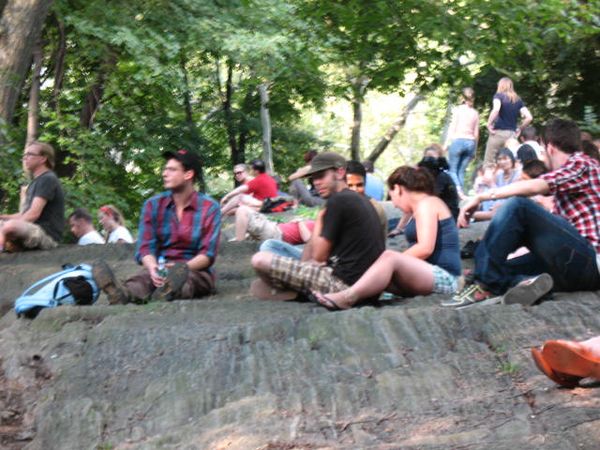 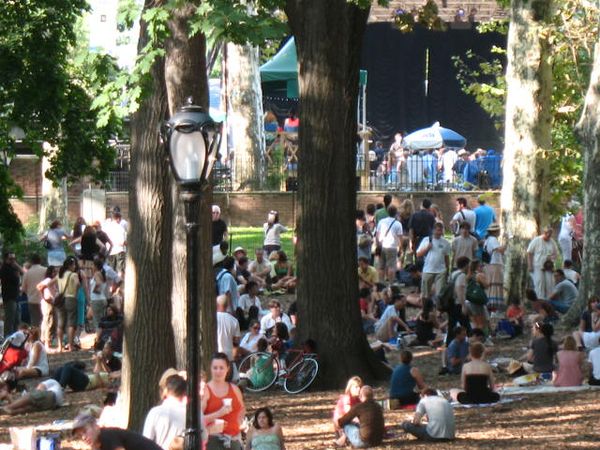 The line to get into Summerstage 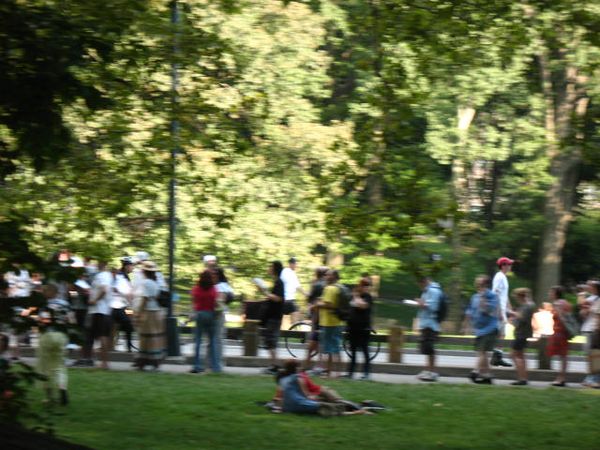 I sat on the rock and enjoyed my cigar, no one seemed to mind, Other substances were being smoked as well. Of course there’s one in every crowd. Some guy in a white hat was sitting maybe thirty feet away from me stood up with his friend and started to walk away, but not before the guy in the white hat turned and looked at me and said, ‘We’re leaving. You’re ruined everything with your cigar. It stinks.’ I just looked at him and said ‘Bye’.

Be on the lookout 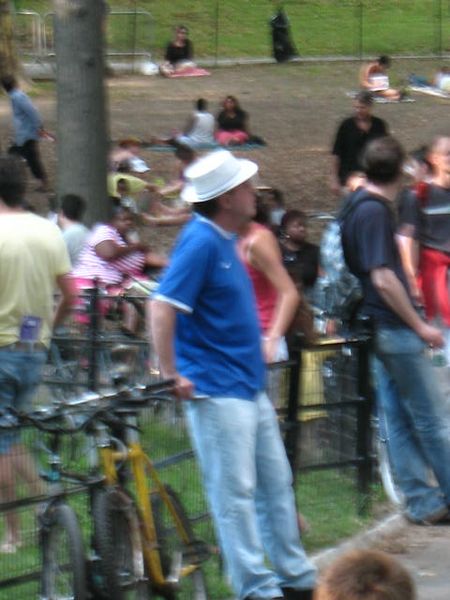 Some sort of confrontation with a guy usually. I think the last time was last year on my birthday. After lunch I decided to smoke a cigar and was walking down the street when some yutz starts screaming at me, hoping that I would die since I was smoking a cigar.

The illegal beer vendors showed up and I had myself a Heineken and grooved to the opening acts, Menahan Street Band, and Naomi Shelton & The Gospel Queens. Both were very good. Naomi Shelton was gospel of course and the Menahan Street Band were styled like the Bar-Kays from Stax. Sharon Jones and the Dap Kings were great but it could have been a little louder.

One more beer and a surreptitious puff and I had to relieve myself. Wide range of people in the park and a ton of tourists of course, all clutching tourist guide books in so many different languages. I watched an older couple, white haired probably in their late 60’s sitting on a bench taking pictures of each other.

Lot’s of toddlers climbing the rock unattended to, somewhat foolishly since the rock is riddled with broken glass in various crevices. No one got hurt. At least while I was around. Not on my watch. 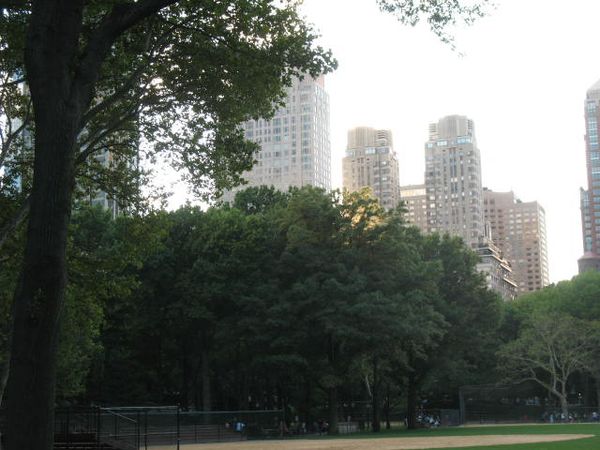 Headed back to the Path train, crowded but I snagged a seat since I knew where the door was going to open. I guess that was a little bit of instant karma. I was soon home heating up some very good leftovers. Bill’s here watching the Olympics as it starts all over again tomorrow.