It’s Saturday and so far it’s been a good day. Last night was pretty good too. Hung out with Bill who was non stop last night. Non stop talking. He was getting worked up on everything on TV. The Daily Show, Colbert Report, Olbermann with Rachel Maddow, the the Olympics, when he started talking ghetto which is quite a sight coming from Bill.

For those that don’t know, Bill is not from the ghetto and he doesn’t talk like that at all. It’s a running joke among me and some of his friends about how ‘non-ghetto’ Bill is. After a while though I needed to ask him to tone it down. It was getting tiring and by that I mean I was getting tired listening to him.

Eventually I started reading the latest Mojo Magazine wand tuned him out somewhat. After watching Michael Phelps win his 7th Gold Medal Bill went to bed. I stayed up for a while reading and watching a little bit of Oceans 13. I didn’t see Oceans 12 so I wasn’t sure if I missed anything. It didn’t really matter since I started watching this edition midway through and eventually I could not keep my eyes open.

Fell right asleep as my head hit the pillow. Woke up to Bill kissing me good bye for the day and him wishing me an enjoyable bike ride. I said it depended on the weather. He wished me a good bike ride again, leaving me to believe he checked the weather report before leaving. I soon got out of bed and was out on the streets getting ready for my day.

Ran into Linda who was my favorite cashier at the supermarket. She suddenly wasn’t there anymore and was replaced by several incompetents. I thought the worst, but here she was. She had taken an early retirement and was living on her late husband’s pension.

I was glad she was still alive as I thought she might have passed away. She’s an older woman who reminds my sister of our grandmother. I’ll have to take Annemarie’s word for it since I don’t remember my mother’s mother.

I was back in the apartment in no time, having a nice breakfast and reading the papers. Around 1:00 I decided to go for the bike ride that Bill suggested. Rode over to the Light Rail station on 9th street under the Palisades and took the elevator to Congress Street.

A beautiful day as I rode down Palisades Avenue, turning onto Hudson and through my old neighborhood. I saw Hector who runs Five Corners Liquor around the block from where I lived with William Charas for 11 years. 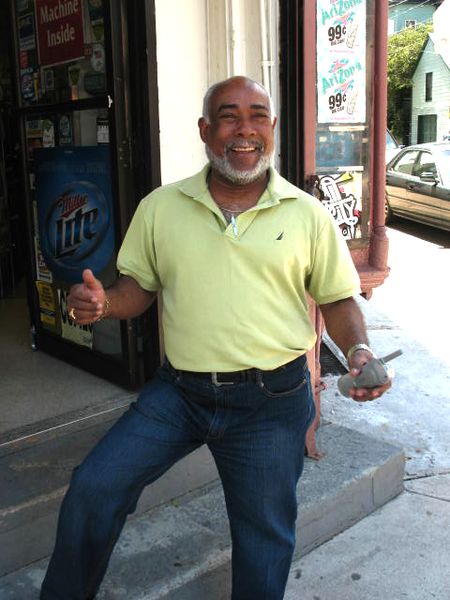 I always though Hector was so handsome and macho and had a crush on him for a long time. His hair is white now but he’s still a sexy guy. Woof! In a minute! After that lustful escapade in my mind, I was soon on Hudson Avenue heading to North Hudson County Park.

The hills were definitely a lot easier this time around. Last time I rode was three weeks ago and it really wasn’t difficult heading up to the George Washington Bridge through Cliffside Park and Fort Lee. I crossed the bridge with no problem, even stopped and took some snaps as the bridge bounced up and down under my Airwalks. 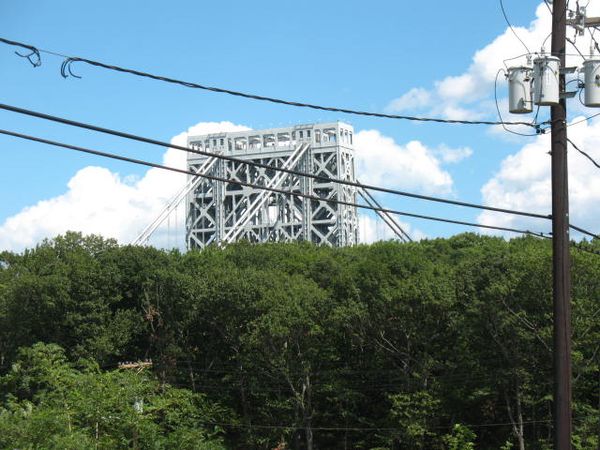 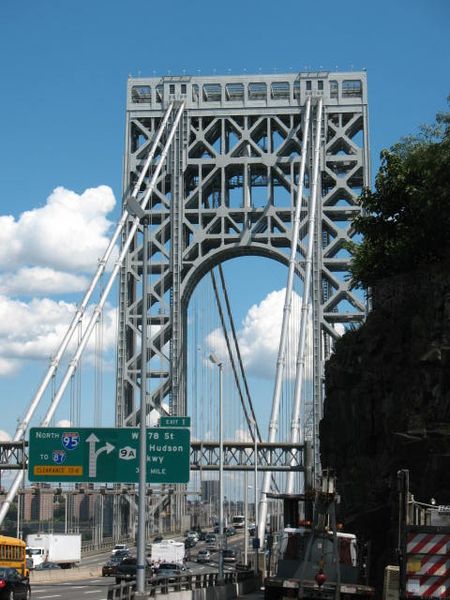 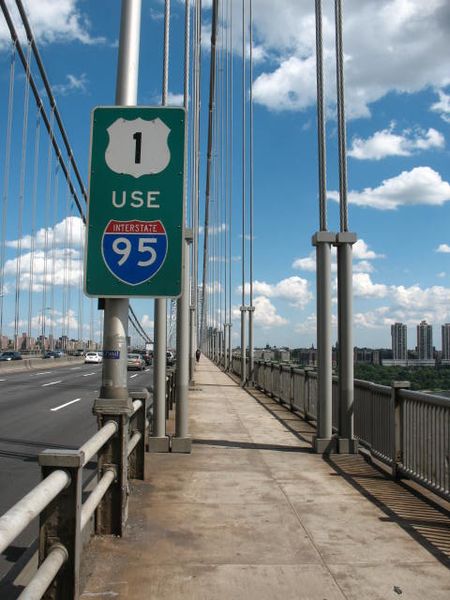 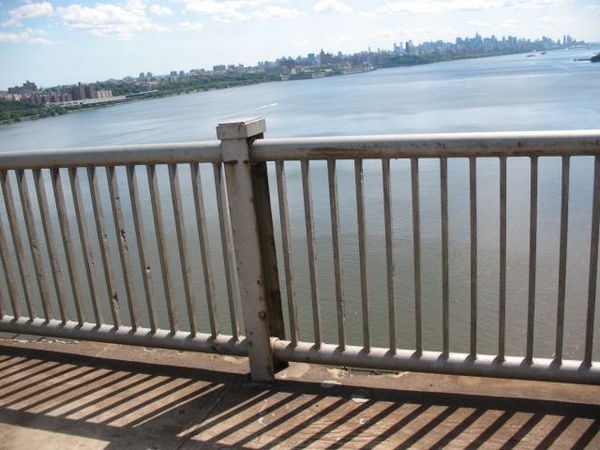 In Washington Heights, I took some more pictures on the bike path underneath the bridge. When I ride I tend to see other riders, in fact the whole environment as aquatic. There were a lot of bicyclists, more than usual and some were riding in groups like schools of fish. 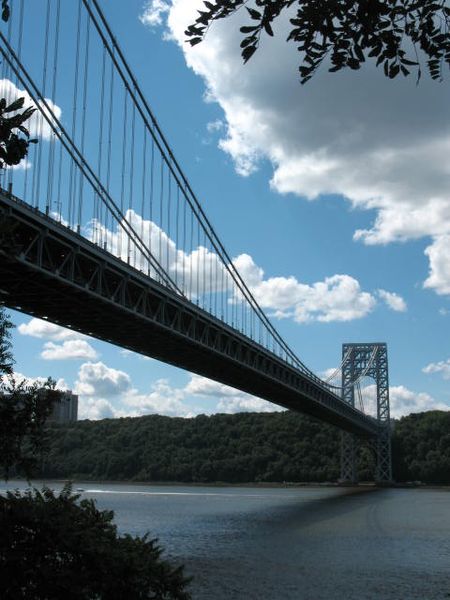 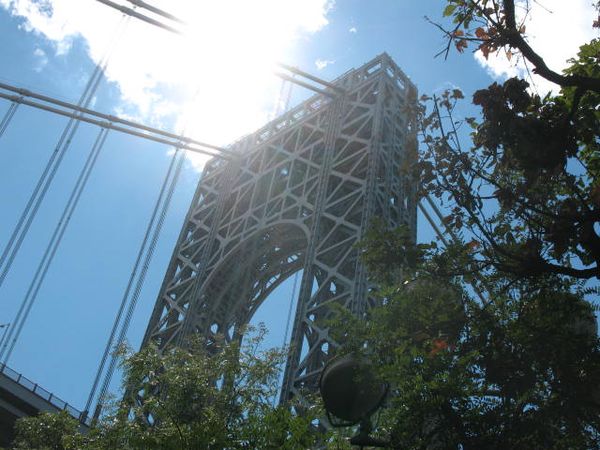 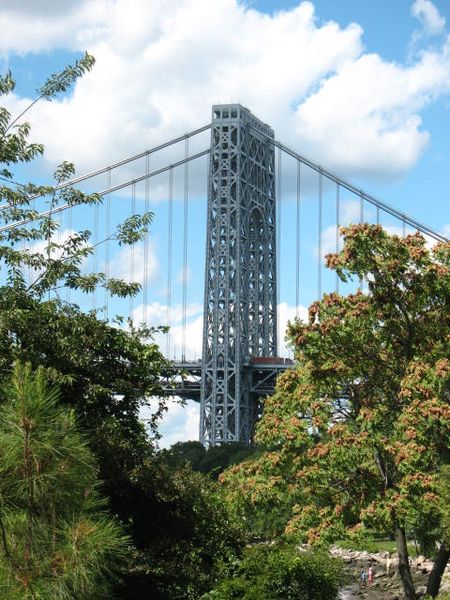 Cars were sharks, trucks were whales, pedestrians were all different types of fish. Then there’s individual fish like myself cycling past various schools of fish. Just something that I entertain myself with while cycling.

Pics taken while riding with no hands! Look ma! 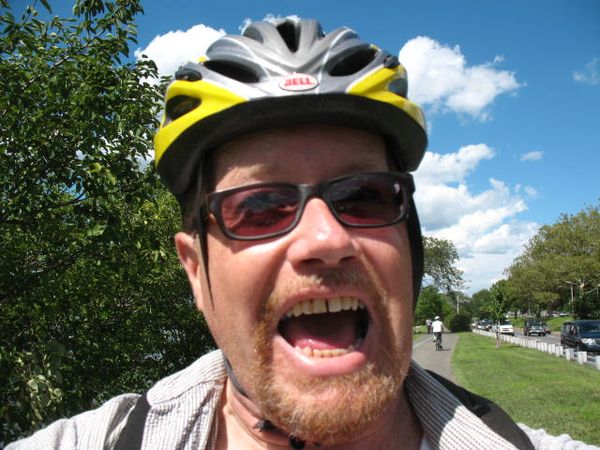 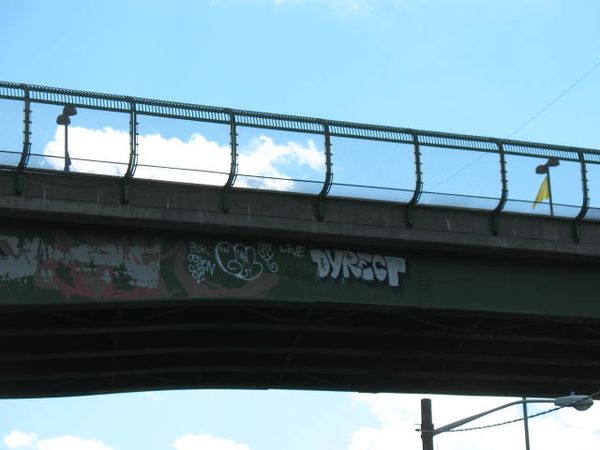 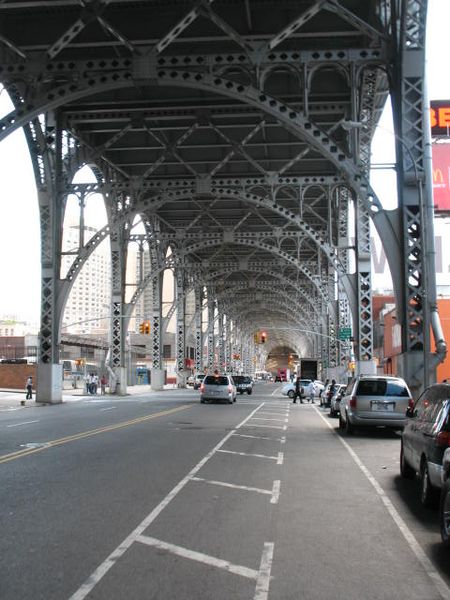 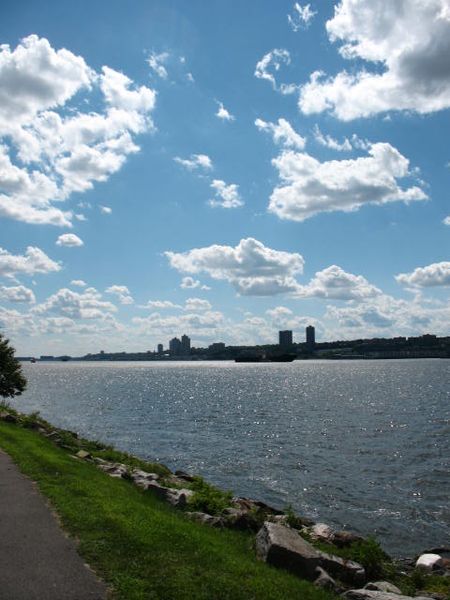 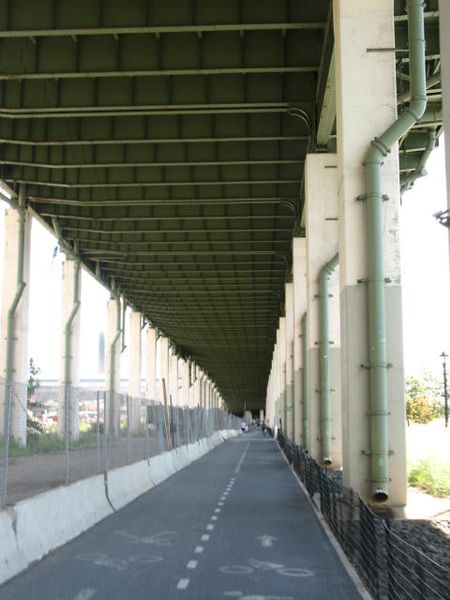 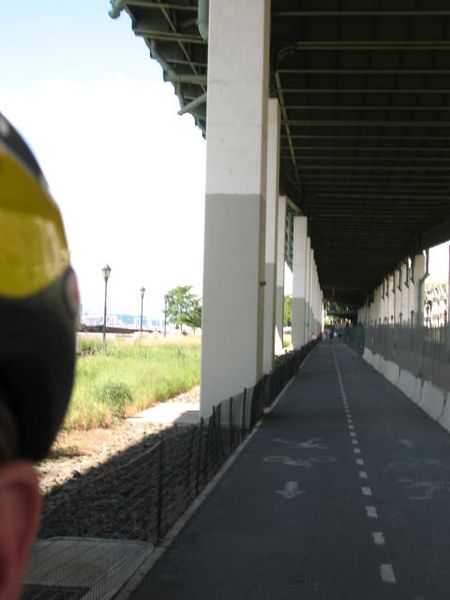 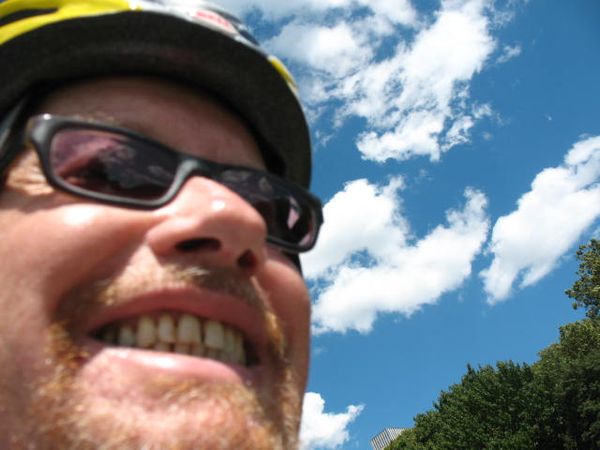 Battles were playing Summerstage so I rode over to the rock and had a sandwich. Stayed for Black Dice who were noisy and fun. They had a beat going somewhat and I enjoyed them very much. I saw Battles last year at the Seaport and they were ok, but I didn’t feel like staying for them especially since I enjoyed what I had heard from Black Dice.

Went over to the skate circle and wasn’t too impressed with the day’s DJ, so I rode out of the park determined to avoid any confrontations with Eastern European Ped-Cab drivers. Back to the bike path on the river, riding past the Tibetan protesters across the street from the Chinese embassy, and the ludicrously overpriced ferry winding my way down to the World Trade Center and the Path train to Exchange Place.

At Exchange Place in Jersey City there was a Puerto Rican festival which I took in for a little while. Woof all around. A pleasant ride back to Hoboken followed. A shower, a nice dinner and now this. 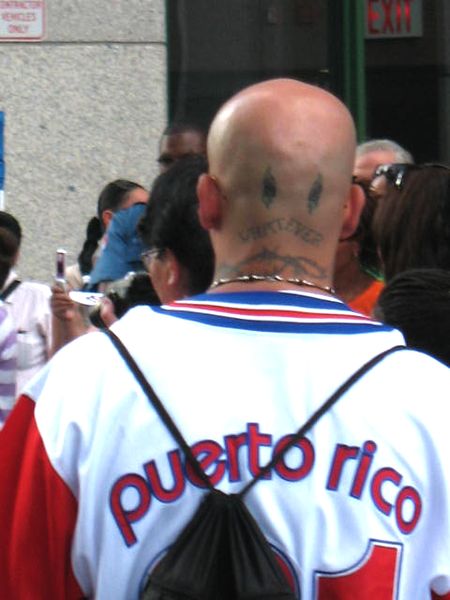 All in all approximately 40 miles today.

Tomorrow I plan on going to Summerstage for the final show of the season, Sharon Jones and the Dap Kings headlining. No bike, I’m going shanks mare.