I love New York but I also love being able to get out of New York and back to the relative safety of Hoboken. It always amazes me the difference one river makes. Things in Hoboken are somewhat normal and quiet, whereas across the river it’s go go go all the time, no chance to rest.

There was a time where I would go out after work, drink, see a concert, do whatever and it didn’t matter what time I was finished with whatever it was that I was doing, the Path train runs all night and I didn’t mind waiting for the train at whatever time I happened to be in.

I didn’t like waiting in the bowels of the Port Authority though, after 1:00AM all buses leave through the basement and it’s horrible down there. Time crawls, and there’s no real escape, plus I was usually in an altered state which didn’t help the waiting at all. The scenes I used to frequent are over or changed, clubs have closed and things cost a lot more money now than they did then.

Funny thing is I make more money now, but then again my expenses have grown. No more cheap rent in Weehawken, lower rent than most in Hoboken and I have a job that’s not in the music business and they frown on coming into work hung over or still drunk from the night before. And everything is more expensive now that it was then. Even more expensive than it was last year.

I’m not complaining, that is just the way things are lately. Somethings I’ve noticed lately that I hadn’t noticed before, like the fact that so many young men are going bald and have taken that preemptive strike and shave their heads. Really, a lot of guys in their twenties are going bald. Was it like that in my twenties?

I wasn’t in danger of losing my hair at that age. Bill’s in his forties and that seems to be the ripe age to start to lose one’s hair. Just something I’ve noticed. No longer a stigma, the male pattern baldness, and they mostly shave it all off rather than assuming the role of Lord Comb Over.

One thing that has been driving me crazy is the Blackberry. A lot of people have them, I don’t and I don’t want one. What I do want to do is smack them out of people’s hands as they walk down the street not paying any attention to anything going on around them. They walk and stare at that two inch screen as if their lives depended on it.

Maybe their jobs depend on it, but to ignore everything that is going on around you is just insane in this day and age. Oh if I only had the cojones, which by the way is not a song cut out of the Wizard of Oz.

I have a feeling that another blackout will occur in New York City this summer. Just a feeling. I hope I’m wrong. And if I’m not wrong in the off chance, I hope it’s only a blackout, nothing worse though that is still pretty bad. That was a thought I had in my head last night as I lay in bed listening to Bill saw concrete as he slept.

I voted today, partly for the democratic machine, partly for an independent. We shall see how that turns out. I met the independent when she was handing out fliers at the Mother’s Day 5k run that Meghan and Rob participated in. So my fingers are crossed which makes typing difficult.

The haters have got the anti-same sex measure on the ballot in November in California. And a christian legal firm has sued to bar New York State from recognizing same sex marriages that were performed elsewhere. 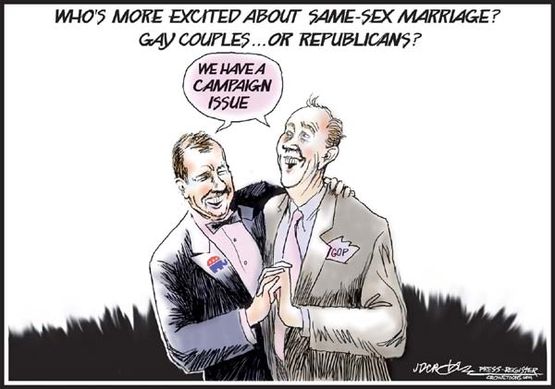 7 thoughts on “There Is No End”