Well it’s been an odd week certainly. Me being sick the first two or three days was out of the ordinary. I feel like I’m 100% better. Talked with Harpy on the phone (which resembled listening to talk radio) about body temperatures. I think my average temperature is in the 97 degree range which means I’m cool most of the time. I always knew that deep down, my being chill, well it was in the blood all along. You can stop laughing whenever you’d like.

Bill spent the night at his mother’s apartment last night. So I was alone which was ok. Nothing on TV at all, and Olbermann and the Daily Show and The Colbert Report eats up the evening. I’ve prepared a cd of pictures of Alexander Lopez. That kid just makes me smile. He’s going to be something else when he grows up, and I’m glad I’m an uncle of sorts.

Tomorrow is Julio’s birthday. He turns 40. Tomorrow is also Bill’s mother’s birthday, she turns 85. Today was so slow at work that I was able to catch a crosstown bus and go to the box office to pick up the Xanadu tickets for Bill’s birthday.

I walked back across town and stopped in the soon to be shuttered Virgin Mega Store in Times Square. I got the new B-52’s for Julio as well as a decent Elvis Presley 3 disc collection from the UK for 10.00. Elvis is always a giggle between Julio and myself.

Got a nice salad for lunch and after that, with my work being done for the day I left the office at 2PM after putting in six hours. I expect next week to be slow again but I only have to work 3 days (like this week).

I was taking off this upcoming Monday, thinking and dreading that Bill and I would be in the Gay Pride parade on Sunday but things being what they are with his mom, and the fact that we wouldn’t be marching (or rather walking) down Fifth Avenue until 2PM, we wouldn’t be finished until 5:00 if things went smoothly.

I was asked to come in since the office would be empty on Monday so I switched my day to Thursday, July 3. So I’ll be off from Thursday until the following Tuesday. I took July 7 off as well. Tomorrow Stine has planned a surprise luncheon for Julio’s birthday at Charrito’s which used to be Ricco’s, an Italian restaurant on Washington Street at 1:00, followed by cake on Pier A if the weather is permitting. Sunday is the first anniversary of Meghan and Rob’s wedding and they’re having a BBQ on Sunday afternoon.

Not making the BBQ on time was also a factor in deciding to forgo the Pride parade. It’s all good so far. Back on my feet relatively, work was slow yet productive and now I’m home writing this. I slept like a rock last night and hope for more of the same tonight. That’s it for now, anything else I’ll let you know.

Here are some pictures from this afternoon.

Panels from the AIDS quilt in Saks Fifth Avenue windows 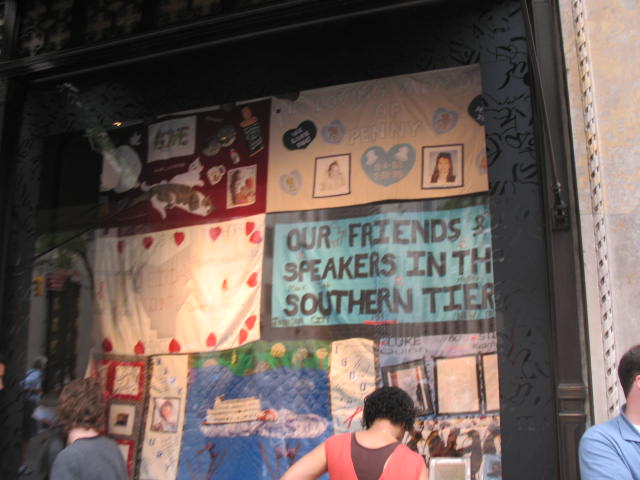 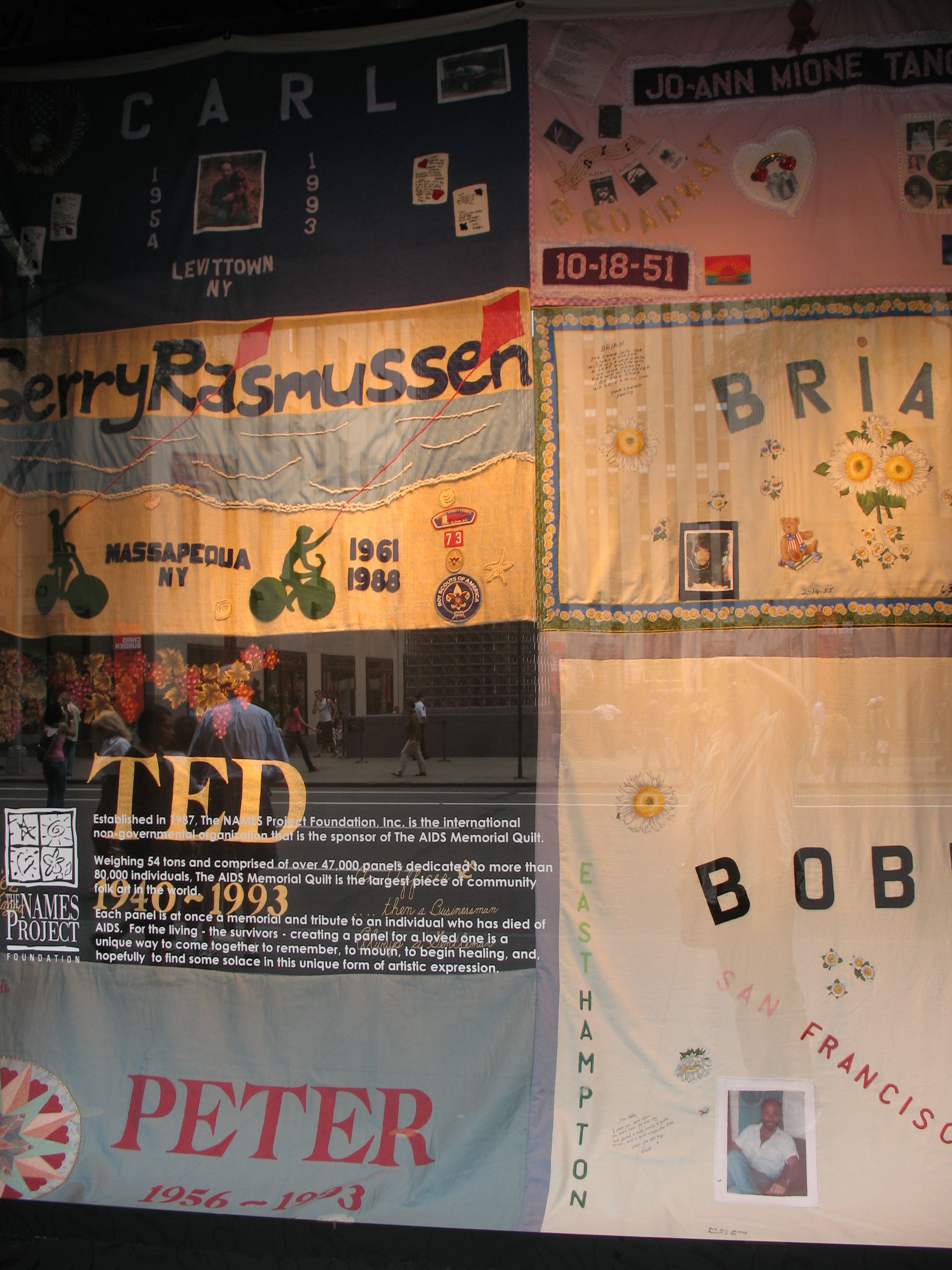 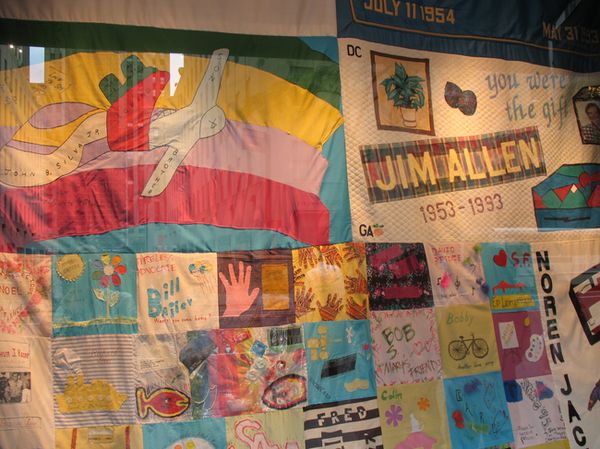 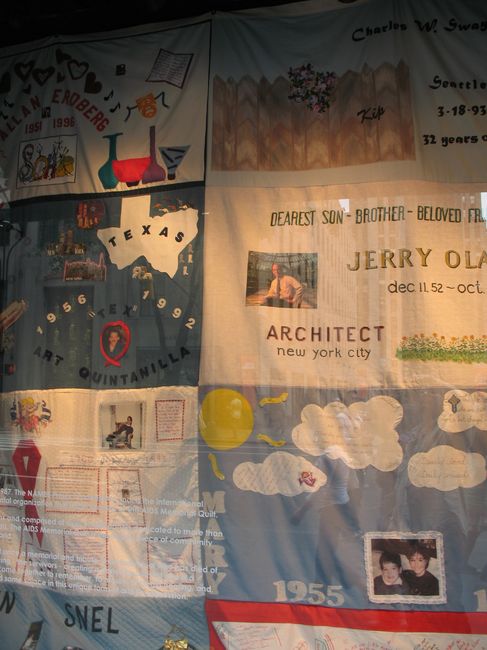 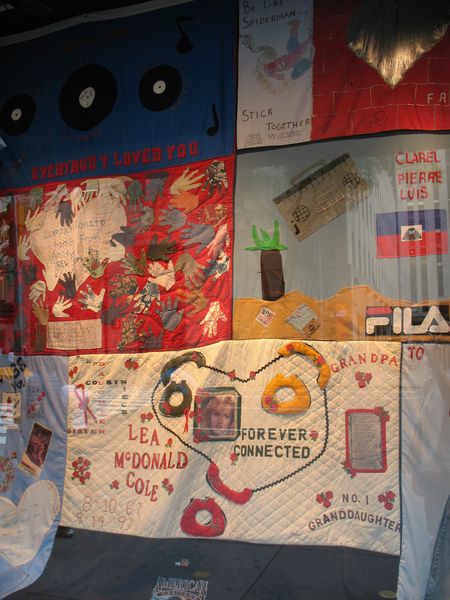 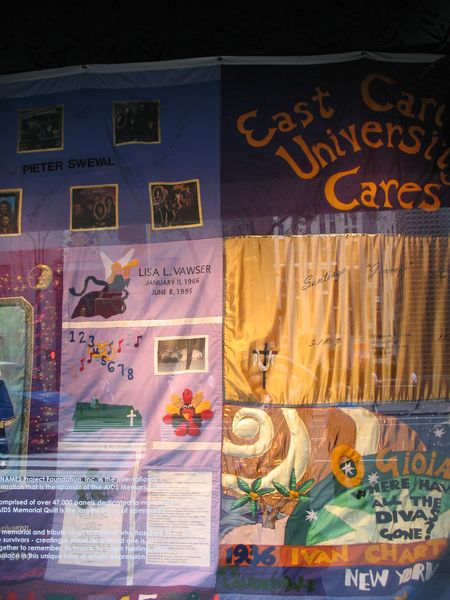 and neo-Spartans on Union Square, or are they Neosporin? 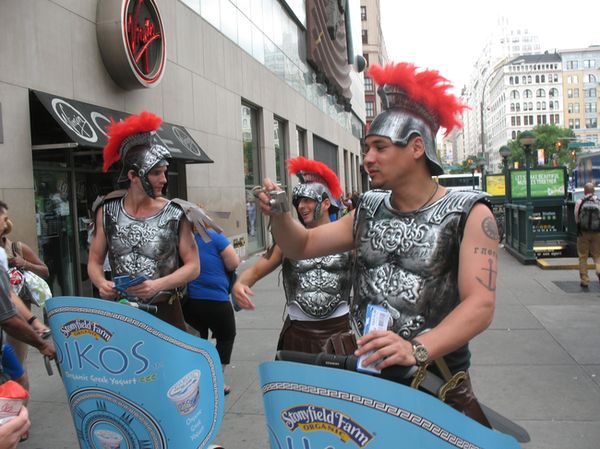