Well it’s only Tuesday. Last night was promising to be a quiet evening at home. Bill out at some acting class, Juan totally off the radar since last week and his bailing. I almost wrote our contrempts but that requires two and I was the only one. Forget about Julio and Stine, as well. They’re a couple doing couple things. I watched Big Love which I really enjoyed a lot, despite the sad ending. I watched a documentary about Rembrandt which was very good, but it was on while I was writing so it obviously didn’t have my full attention.

Bill texted me as he was on the bus home. I sat and watched TV, reading the rest of Mojo magazine when Bill walked in, so happy to be home. Kisses back and forth and I went back to reading as he unloaded his bags. A few minutes later he asked if I could call his phone, which usually means he’s misplaced his. I called, he looked. I called again, he kept looking. Eventually it dawned on him that he must have left it on the bus which sucks. He has the National Anthem to sing on Friday at Madison Square Garden and was hoping to get in touch with his contacts.

Bill left the apartment to try to get the bus he rode in on, but it was too late. He was fucked. I felt terrible for what he was going through. But there was nothing I could do except to go to bed. Didn’t fall asleep right away, more than likely that was because of all the caffeine I had in the morning when I got to the office since I barely had any when I left the apartment. Bill came in dejected and upset with himself, and I tried to make him feel better but he wasn’t having it.

He was up and out of the apartment this morning as I struggled to get out of bed. Bill made some coffee for me, this time it was safe to drink. I showered, had some cereal checked the mail and before you know it, I was almost late for the bus. I caught the comfortable bus with the usual nameless youngsters, and I passed Lou Carbone outside the coffee shop on Washington Street. I’ve known of him for years, and thought he was sexy at one time, but he’s a Lothario of sorts with the ladies. I always thought of him as the Leonard Cohen of the Hoboken artsy set. In 25 years of being in Hoboken I doubt if I said anything to him at anytime.

Work was quiet, Greg Stevens out at a golf function upstate somewhere. I chatted with Miriam online. Hadn’t seen her in ages. Her baby is getting big much to her dismay. She should have taken my gold fish advice under consideration. A fish will grow to the size of it’s environment, so why wouldn’t a baby? It was great to chat with her though.

One cool thing I did today was go to the Kwik-E Mart on w42nd Street. I read about Joe. My. God. going to the store and I almost went myself after work yesterday, but decided it would probably be less crowded in the morning. It was decidedly less crowded. Only myself and two young women in the store. I took some pics, bought two Squishee cups, two Buzz colas and two pink donuts which didn’t last though the day.

That’s it. Here are some pics of that adventure.

The Kwik-E-Mart on 42nd Street 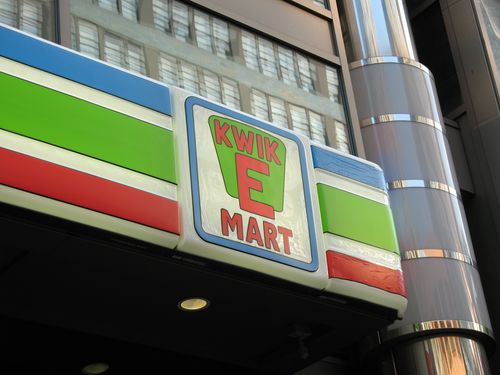 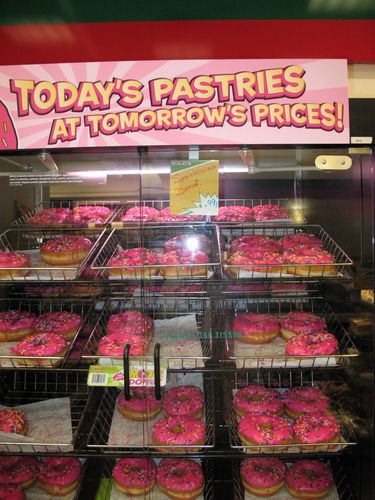 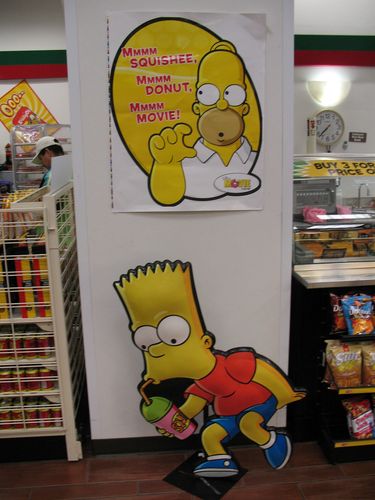 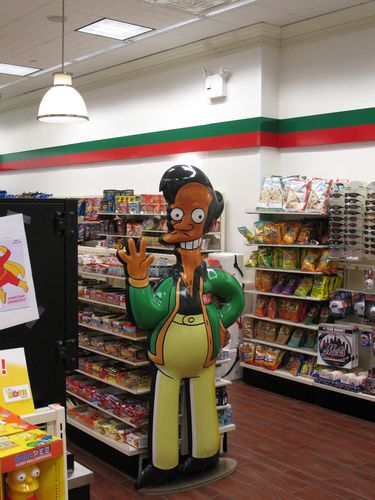 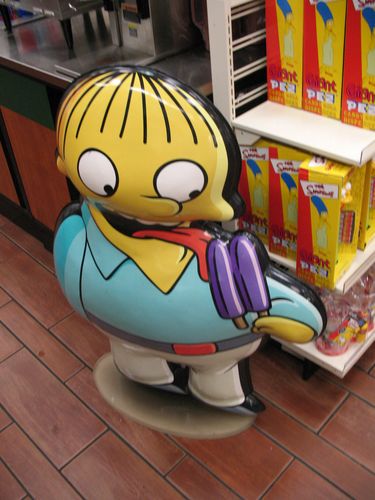