Yesterday was ok, a bit odd. Perhaps the planets are in some alignment yet to be figured out by the eyes of people of Earth. Speaking of Earth, I spent most of the day in the vicinity of a television or this computer, trying to save the planet by watching Live Earth. Strangely enough, I wasn’t moved by anything in particular like I have been by previous globally television rock spectacles. In the past some one or some group would stand out and just move me somewhat. Didn’t happen watching Live Earth and it didn’t happen watching the Princess Diana thing last week. In fact the only thing I got from that was a laugh watching Princes Harry and William stumble through reading index cards about the event that they were hosting.

I tried to find things to do around Hoboken since it wasn’t turning out to be a beach day after all. I suggested getting some bicycles and ride around Hoboken but they didn’t have any at the free bike stand on Washington St. All given out for the day. Then I remembered at the Hoboken Museum, there was an exhibition titled Hoboken in the Seventies. Alas, that closed a week or so ago and they were currently between shows. It was too hot to do anything, and Annemarie and Earl wound up watching Live Earth with me in this hovel where Bill and I live.

We tried playing the Simpsons trivia game which I last played, maybe five years ago. I’d forgotten how complicated the rules are, especially if in a slightly altered state like I was in, courtesy of a little Jazz and a pint of Guinness. Annemarie dropped out from laying after a round or two. Earl and I continued, occasionally distracted by Live Earth on the Sundance channel. The Sundance Channel did a decent job of broadcasting and educating, but it was more of the latter than the former. They soon went back to Julio and Stine’s and I was going to take a nap but was waylaid by the Beastie Boys transmitting live from London. That was exciting, but not moving. It did keep me from napping so that must count for something.

I did get a phone call from Pedro who was meeting up with Ray in Central Park. That sounded promising but I explained that I was hanging with my sister and her son and I don’t get to see them that often. He remarked that he doesn’t see them that much either and he’s still going to go. He was tempting me, but I begged off, knowing that if I went I’d probably get drunk and have a good time with two great guys who are exceedingly handsome and love me very much and oh the price I would pay in the morning. So I stayed home and had tow Guinness.

Bill was at his folks for the evening and Juan was in town. Didn’t know what time Juan was coming so I continued watching Live Earth and had a vodka with Seven Up. Not too strong and nearly finished when Juan arrived. I made him a drink and one for myself but this time I was a bit heavy handed, perhaps with my own drink and it finished me half way through. That sucked because I hadn’t seen Juan in a while and here I am inches away from a spinning room. He understood and I regrettably saw him out. I should stick with beer, or at least have someone else make my drinks. Obviously I can’t trust myself.

I woke up feeling ok, no hangover. Made some breakfast, showered, lathered sun block on and just waited for the call. Annemarie called soon enough. Earl was said to not want to go to the beach, just sleep. I hoped we would have a smooth ride down the shore this one last time for the summer with Anne, Rex and Earl but we hit traffic and too to an alternate route of highways and side roads which were very nice.

We were going to head to Monmouth since we figured that Sandy Hook would be packed at 11:00, but opted instead for Sea Bright which was nice but crowded. Really crowded on a strip of beach. Very mixed crowd and a few humpy guys to look at. I went into the water about three times with Anne and Earl. The air was 90 degrees the water was 68 degrees. Very cold currents so staying in the water was a challenge. It seemed to get colder the third time we jumped in. We were on the road back home at 3:30, getting the obligatory ice cream at Crazies/Thomas Sweets in Rumson. A quick stop in Hoboken where we unloaded the beach gear that belongs to Julio, Stine and myself and picked up Bill. It seemed like an even exchange as we headed to Garfield so that the Californians could say farewell. Frank is on the mend but can be overwhelmed by a lot of commotion like five people suddenly appearing in your formerly quiet living room.

Then we all shuffled out to the car and it was off to Hillsdale for more of the same with Brian, Karen, Hillary, Brian and Cassie and some baked ziti and lemon cake. I do love Karen’s cooking and I surprise myself with the restraint from being a gavone and eating everything in sight. So there were some sweaty eyes and bladders moved in that vicinity. We drove home and waving good byes, kisses all around, listening to Joe Strummer and the Mescaleros, specifically the last song, Minstrel Boy.

I’ll get a last bon voyage in when I give the key to my apartment so that she or Earl could sit here while my landlord and the building inspector look over the things that should have been fixed months ago.
I miss them already. I wish they lived over here, if not in NJ than on the east coast. I think they do too.

Here are some beach pics 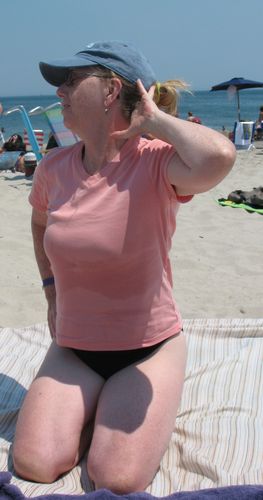 someone found the snooze button 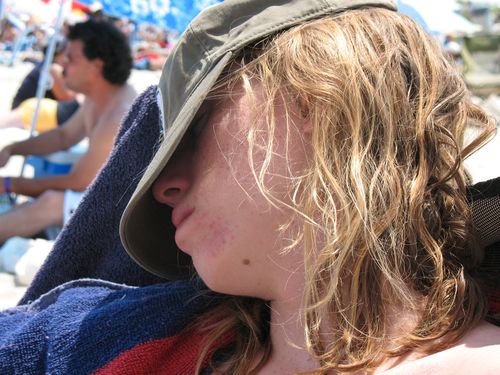 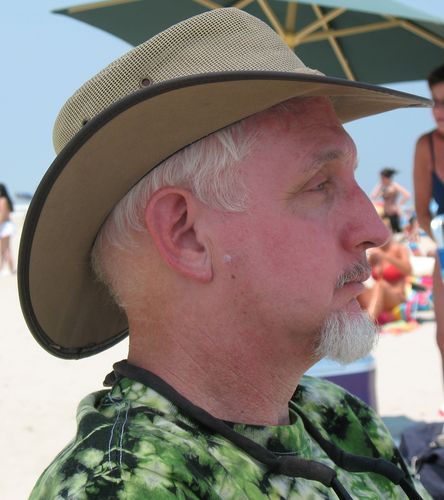 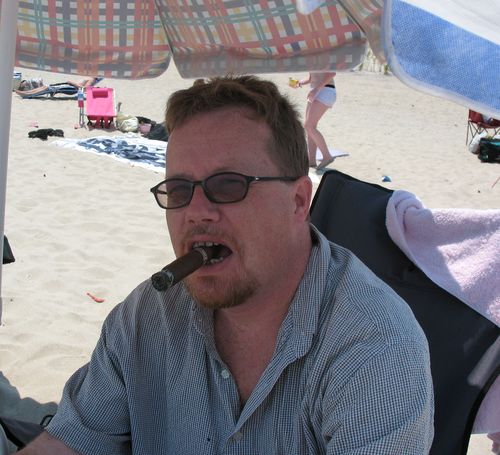 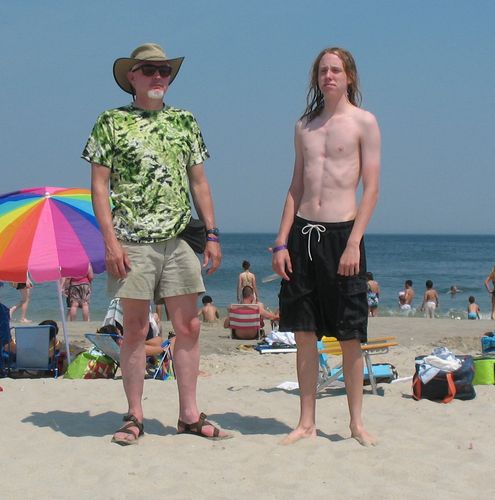 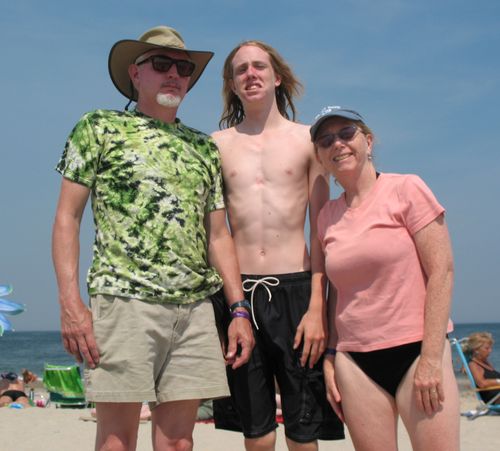 Me and my big sister 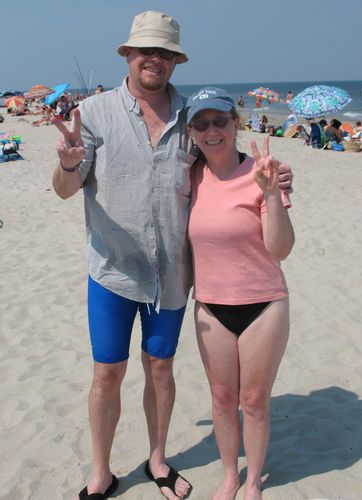