Friday night. Just got home. Hungry and hot and didn’t feel like cooking so it’s a call to Torna pizza. They make small bar pies which hits the spot in moments like this. Last night, Juan came over and hung out. Mister Get Over to those in the know. I played him Creature Comforts from Monday night. Juan was surprised it was on CBS since no one he knows watches CBS. The old fogey network I suppose. I’m pretty sure he enjoyed it. How could he not? He starts his new job on Monday working for Fuji Film. Seems like a pretty cool job, just have to have good aim when pissing into a cup.

After that we watched the penultimate episode of the Sopranos which Juan missed on Sunday night. Just as intense as the first time. I asked Juan if he thought AJ was very upset or just a pussy and he thought he was just a pussy. Last week the media was all about the 40th anniversary of The Beatles ‘Sgt. Pepper’s Lonely Hearts Club Band’. This week it’s all about the final episode of the Sopranos, speculation on who will die, what will happen to Tony and Carmela. I don’t want to know, I just want to see what happens.

Went to work today. Not much of a pall over the office today. It was busy and quiet at the same time. People have started taking their vacation time so I guess summer office season has started already. I have to find someone to fill in for Carla while she goes on holiday and after that, she’ll be going on interviews, looking for a new job. This is common knowledge since she just graduated from college. No one wants to see her go, I certainly don’t. I’ve been asking various friends if they needed a temp job for a few weeks. Even asked Juan who decided to go after the glamor filled world of film distribution.

It was slow enough for me to leave early. It being a Friday, I let various people know I was leaving early to go to the hospital. Once again they told me I could take all the time I needed. I left at 2:30 instead of 3:00 and walked across midtown with warm breezes and bright sunshine all over the place. Got on the 163 bus to Hackensack and rode with all the other people headed back home to Bergen county.

Got to the hospital and ran into Elaine and brother Brian in the lobby. We rode up to brother Frank’s room in the step down ward from the intensive care unit. Frank was in bed, talking to a friend of his and Elaine’s, a woman named Chris. She was nice, the atmosphere was cordial until Elaine asked Frank to write his signature. It seemed he would write almost anything but, almost like he was copying other things on the paper. Elaine insisted, Frank got upset and testy. Elaine is really bearing a lot from this whole situation.

Sometimes when compassion bumps heads with frustration… It didn’t last long. Frank is making progress, much like he did when he was first admitted into the hospital, before the operation. The operation took care of the infected heart valve with a metal valve to replace, but the aphasia returned much like it was during the first days. He made progress then and he’ll make it now I’m sure. After Elaine, Chris and Brian left I played the Bird and the Bee for him. That’s a group he likes featuring Lowell George’s daughter. He got all misty, saying that a month ago he wasn’t in this position. I reassured him that he’ll get better and enjoy the music again at home.

Frank was getting tired from trying to speak clearly so I left around 6:00. Listened to the White Album while waiting for the tardy bus which quickly filled up and got off in Union City at the post office. From there I walked down to Hoboken. Ran into Frank’s friend Glenn Morrow and I told Glenn all about what happened to Frank. He was stunned and offered to visit Frank in the hospital. I told him that that might be too much for Frank, trying to stave off any embarrassment on Frank’s behalf. Glen offered to send him some CD’s from Bar None records which Glenn runs and I told him that would be a great idea.

Frank may be getting out of the hospital over the weekend and going into a rehab hospital in Saddle Brook which would hamstring the bus routes I use to go to Hackensack, but Frank suggested just phoning him which is what I might do.

and here’s some pics! fresh for you suckers! 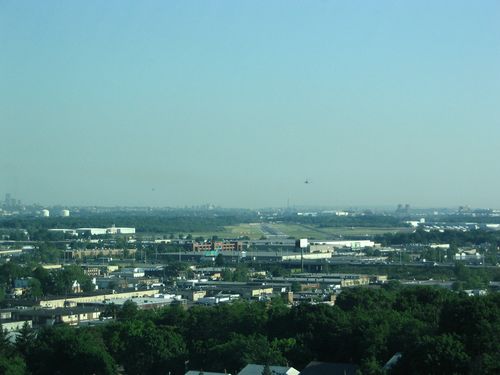 the roof next door 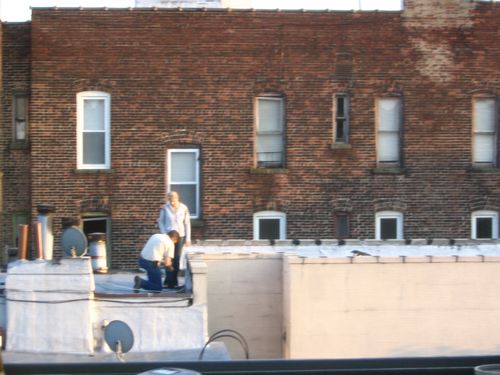 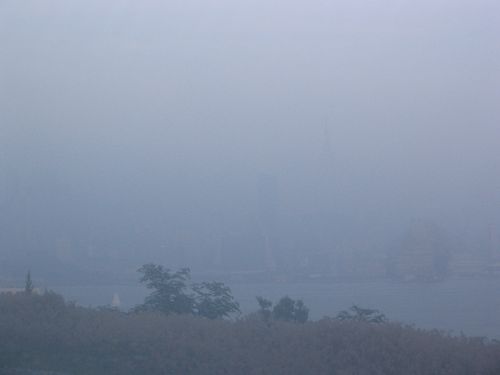