What the hell is wrong with me? Lately I’ve been plagued by self doubt, mainly about how much better I had it at Wanker Banker, and why the hell did I leave. I actually have to take a step back and realize and remember that the place was driving me crazy. True I was my own boss there, but basically I was so unhappy. I have to keep telling myself that, believe it or not.

Usually something will trigger the feeling of doubt, last night I was thinking about wine and how lately I had been getting my bottles of wine from Wanker Banker. I miss walking around midtown, I miss wearing a suit and tie, and I miss some of my coworkers. But I was so unhappy. I was doing the job in my sleep, making my own hours and still getting the task at hand done.

Was I being petulant when I left? No, I was generally unhappy. They did treat me like shit the past few months. The gave me half of what some people got for a bonus despite the fact that those people weren’t even there as long as I was. They turned a blind eye to being ripped off by various employees. New divisions of Wanker Banker were also pulling me in crazy directions, and I had no support from anyone really regarding who these new divisions were or how should I support them.

Also I was thinking about how other coworkers had moved on and how happy they seemed to be. Maybe I wanted to find some of that happiness for myself. I know I could never go back there again, despite a longing fuelled by doubt.

Being cooped up in the apartment most of the weekend really lent itself to feeling like that. I have to apply myself at McMann and Tate. More opportunities are possible. I need to take matters into my own hands without relying on Felecia my supervisor.

The sun finally broke through and I was able to take a walk outside and enjoy the waterfront. Quite nice, not too crowded. Of course I had a Padron. Julio couldn’t go out walking and Bill was content to stay home and watch Law and Order again.

Many cuties wandering about. I wandered over to CVS on Clinton Street because I heard an old friend from McSwells was working there. A dear sweet guy, Martin Kelly. Hadn’t seen him in years and would’ve liked to say hello. I looked around the store but didn’t see him.

Maybe he saw me first and hid. Perhaps I lingered too long in the Incontinence aisle. In any event, it was good to know he’s alive and well and working. Still digging the Arcade Fire cd. It’s so good. I’m sorry I missed some opportunities to see them live. Better late than never.

Tomorrow will more than likely be the last session with Phillip Beansprout for Bill and myself. The insurance will end by the end of April and the new job won’t cover it. The new job won’t even have Bill insured under my plan. Bill’s cool with that. I think we made enough progress with Phillip. We’ve learned to communicate better and I think that was a main problem that we had. The lack of communication. 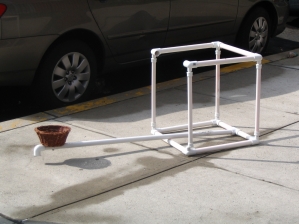 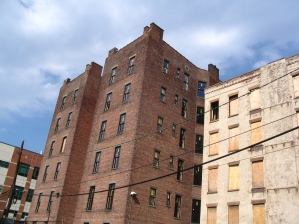 A building being renovated by Stevens Tech. 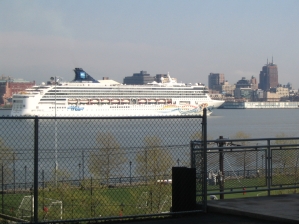 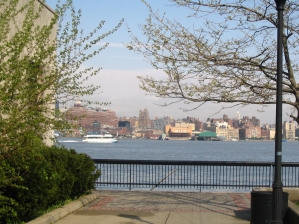 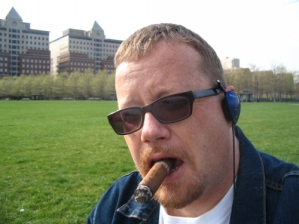