Bad sleep patterns last night despite exhaustion. I was so tired I crashed in my long johns and fleece. Of course I eventually took them off but I was physically exhausted and after the therapy last night, somewhat drained. Oh Mick Jones where are you when I need you? And what’s with the restraining order?

I shuffled off to work early enough sans skully. Since I was losing so much body heat through an uncovered head I didn’t sweat so much as I shuffled and hustled my way to work. Met Tony and got the egg sandwich that I hadn’t gotten in a few weeks. Needed some fuel since I didn’t have my usual breakfast at home boo fuckin hoo.

I finished off my Clash/Big Audio Dynamite fixation by playing their first album. For some reason, ‘Complete Control’ brings a lump to my throat and a tear to the eye. It always had, something about the way Joe Strummer sings with such passion. The song I identify with a lot is actually ‘White Man (In the Hammersmith Palais)’. About going to a reggae show and expecting incendiary songs about revolution and instead getting a lot of razzle dazzle and choreographed dance steps. Yes, I’ve been the White Man (on Nostrand Avenue).

Work was torturous, what with no errands and Persian Bitch and Fat Harpy circling the ceiling. Stuck indoors and just feeling like crap from lack of proper sleep. Usual psychodrama bullshit and I am just as tired of writing about it as you are reading it I’m sure.

Bill called several times, contrite which was nice but not necessary. Everyone has bad days, crap days. You get through them and it’s ok. But then again, I have called him terribly contrite after being nasty to him, or so I perceive. It was nice to hear that he loves loves loves me. I know he does but to actually hear it means a lot.

I am so sick of these adorable kids on television commercials behaving rather snotty or too wise beyond their years. They’re too young to be acting so it’s probably their real personalities. And now that they’re bring home some cash, they get told to play it up all the time.

Gilmore Girls is on and has once again captured my attention. I’ve been watching the show forever. Since it was on Fridays right before an even funnier and better show called Popular. Popular was cancelled due to unpopularity. Gilmore’s got funnier and wittier. Still hooked into it. Love Lauren Graham. It has been getting a bit melodramatic lately now that Rory is going to Yale.

Like a soap opera with references to Dorothy Parker. Lauren Graham gets the best lines and delivers them well. Alexis Bledel who plays Rory tries admirably, but can’t pull it off like Lauren Graham.

Now it’s Scrubs, which is a dynamite show. So it’s come to this, reviewing shows as they unfold before me. Totally television without pity.

Okay Clash/Big Audio Dynamite weekend has wound down. Still get a nice buzz thinking about meeting Mick Jones. Still kicking myself for not having a camera handy so I could take his picture, and I still laugh at myself in embarrassment for grabbing him by the shoulders telling him I know who he is, and that’s not Joe Strummer.

I am physically exhausted from a lot of running around Manhattan today. Went out to get fruit this morning. It’s been so cold that only a few foolhardy souls like myself can brave such fierce cold, yeah, like it’s the Arctic. Jeezy Creezy it’s Manhattan, dress right and you’ll be fine. And try to walk in the sun. No biggie. It was out. Didn’t have to look far.

I received some credit for coming in on Saturday and cleaning out a storage room, which is actually known as the executive washroom, meaning it’s a nice loo and has a shower stall. One of the good ones requested it’s availability and since he’s one of the good ones I delivered. And got paid overtime, which is sweet and means the government will take a larger chunk out of it than usual.

Oh it’s ok, I know the money will go to schools and health care and fixing roads and bridges and promoting peace. Yeah that’s what they’ll use my dough for. All that good stuff.

That seems worth seeing. Cyndi Lauper is in it too. Oh the shark bites… A few years ago I saw ‘Cabaret’ there with Alan Cumming as the Emcee. I saw it for free since the Roundabout Theatre Company has a plan that you can see the show for free, standing up if you help out the ushers. They call it, The Usher Program. Just got to wear Black slacks and a white button shirt. Then you tell people to wait by the seats for an usher to show them where they sit. After the show starts you’re free to stand in the back. I plan to look into that again.

So from there I walked on Central Park South, smoking my cigar, walking over to Bed Bath and Beyond to purchase towels and bathroom things for that ol’ Executive Washroom. The whole thing took about two hours and two hours out of the office on my own schedule can seem so much longer. I was also able to pick up a late lunch and a tie that I had dry cleaned last week.

Got back to the office, ate the late lunch of Penne, Pesto and Chicken and then set about answering questions and putting final touches on what may be my crowning achievement at Wanker Banker, the Toilet.

Soon work was over and it was time for me to split. Despite the cold I was determined to walk to my session with Bill tonight. It was a ‘Sandinista’ day and that’s a lot of songs. The walk down was the second disk, very dub wise and that, combined with my exhaustion, caused me to lurch to and fro occasionally like a drunken sailor on leave.

Met up with Bill who was not in a good way. Kind of Blue, and mostly uncommunicative. Oh this held such promise, this session I tell you. We sat next to each other, not speaking in the waiting area. I pulled out the New Yorker, he was playing games on his cell phone.

Good doctor Beansprout beckoned and we followed and figured out that COMMUNICATION IS VERY GOOD. This was after yelling and finger pointing and the recognition of an albatross.

Why beat up on yourself when the world is chomping at the bit to beat you up? Asking for help doesn’t make one weak. If you like to help people, it’s best that you help yourself first. All common sense which we all forget from time to time. The trick is to listen and respond when your partner or friend is throwing out a lifeline.

So when you reach the Bottom Line,
The only thing left to do is climb,
Pick yourself up off the floor,
Don’t know what you’re waiting for

And here’s a picture of Mick from ten years ago. 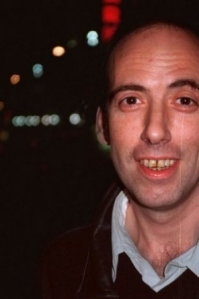